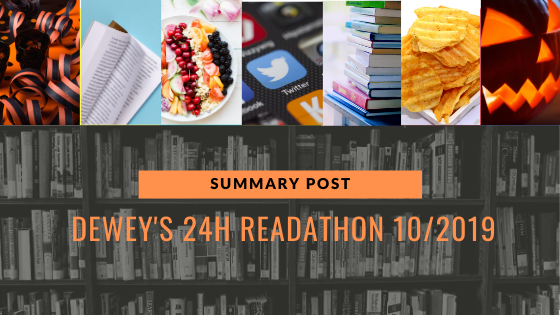 And once again it is October, which means it’s time for another Dewey’s Readathon. Once again this means 24 hours – or in my case 25, as in Europa tonight is the change between summer and winter time – of reading, snacking and … how ever you call excessively using social media to stay in touch with readers worldwide.

So, this time I’ll make a summary post again, where I post all the challenge entries I submit – either directly or via embedded tweets. I’ll also try posting regular updates, but after 4 or 5 years of readathoning, I know I’m not thinking about updating once I’ve settled into reading and tweeting.

If any of my readers still wanna sign up to readathon as well, they can do so – I think until the very end. Just sign up here. All you need is a basic understanding of English and a few books. 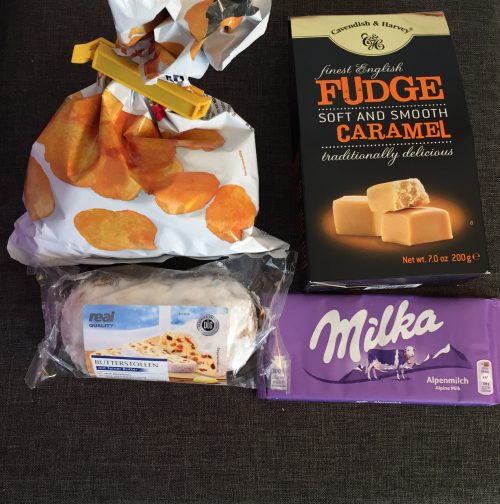 I’ve got lots of unhealthy snacks at the ready and I plan on making vegetable slices with garlic sauce to dip in later on. So close to Halloween one can’t have enough garlic to keep vampires at bay, right? 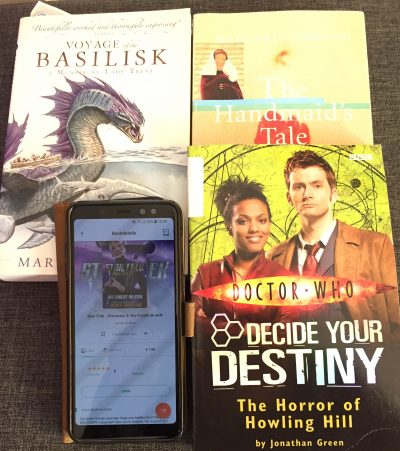 And while I usually don’t make book stacks for Readathon, this time I actually have a plan what I wanna read. The Doctor Who DYD is a must as in a few days the National Novel Writing Month is here – in which I’ll be writing a DYD. So, getting into this style of narrating is … well, research for my novel. I also have a few gardening books I need to ‘read’ for research (what plants are the best if you want to colonize another planet), but as I won’t read them completely, I haven’t added them to the stack.

But this time I have at least 3 english books ‘on the menu’, because … let’s be honest. If I read German authors, chances are slim that any other participant will know the book. And I like talking about books with people that actually read them.

Holy, this challenge was hardcore. Do you have any idea how hard it is to find two I’s and an R? In my next life I wanna have another name, please. Anyway, this is my entry for the #d24titlename challenge for #readathon.

A howl. Steps. Finally an adventure!

The one quote that really touched me, is a bit longer. Therefore pictures:

1) Acceptable, given that I’ve mainly read in a foreign language.
2) No strategy, sorry.
3) Nuts and raisins
4) Each year I think about it, but nope, I don’t think I’d be a good host. And I don’t have much money, so I can’t do challenges either.#readathon pic.twitter.com/qDkIpkhaT0

2 h 23 min: Finally done with the last 20k words of a fanfiction I planned to finish before readathon. Now I’m tackling Doctor Who first, though I’m getting a light headache. There’ll never be a readathon during which I’ll be healthy.

3h 47 min: Doctor Who is done. Starting The Handmaid’s Tale now, but somehow I’m extremely tired. Might change plans and either switch to a german book (reading in my native language might be less draining?) or to an audio book – or to sleeping soon. But it’s not even 6pm, so … maybe a third coffee would be a better idea?

I don’t know which time it is, as we slipped from summer time to normal time this night. But I slept from 9h on till an hour ago, and before that I’ve read a german children’s book. Now back to Handmaid’s Tale. It’s going so slow. Too much description of mundane things – though I assume that’s to make the reader feel like Offred a bit, because she doesn’t have anything else.

7 minutes until the end: Have managed three books. I wish I could have managed botanical NaNo research, too, but 24 hours are only so long …